Students will spend three days in the Greek capital of Athens, home of democracy, philosophy, and theatre. Today Athens contains some of the world's richest museums (The Archaeological Museum) and site of the Acropolis, Parthenon, and Acropolis Museum, where ideas of classicism, democratic sovereignty, imperialism, and cultural appropriation can be fruitfully explored.

Students will then travel to the Aegean Island of Lesvos, where they will stay for the remainder of the field school. The island of Lesvos is the third largest in Greece and has played host to important developments in Greek history and culture since antiquity. Home to Archaic era poets Alcaeus, Arion, and Sappho and the historian Theophrastos, the island was known in antiquity as a place of refinement. The island has passed under Roman, Byzantine, Genoese, and Ottoman rule, and was host to the legendary pirate admiral Hayreddin Barbarossa.

HUM 360-4 - Special Topics: Great Themes in the Humanistic Tradition
An interdisciplinary study of a selected theme that has made a lasting contribution to the humanistic tradition in more than one field of endeavour (e.g. philosophy, politics, literature, economics, religion).
HUM 277-3 - History of Greek Civilization
Surveys the history of Greek civilization from Mycenaean Greece to the twentieth century.
HUM 226-3 - War and Society
Examines scholarly approaches to defining war. Here, we investigate the role of organized violence in society, partake in debates on violence and human nature, study the evolution of warfare through technological innovations and cultural change, and consider the complex relationships between war, culture, and society.
The application deadline is January 25th, 2023. 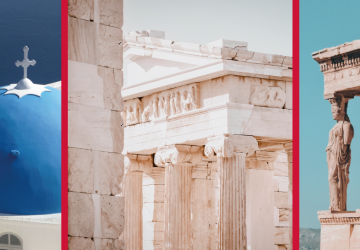