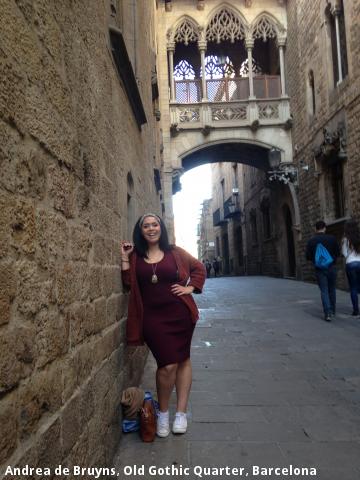 Here’s an update on my study abroad experience so far: I’ve been here for almost 4 months, with only 2 months left until my journey is over. Spain is a beautiful country with a diverse landscape and culture. Between attending classes and studying, I’ve had the opportunity to travel to a few different major cities. Here are some places I’ve been to in Spain:

Barcelona is known for its architectural variety thanks to the famous architect Anthony Gaudi who designed the Sagrada Familia and Park Guëll. No matter where I walked in Barcelona the buildings were beautifully sculpted with many colours and designs, even the simplest apartment building looked like a piece of art. Sevilla is located in the region of Andalusia, the most southern portion of Spain. This city was filled with tons of historical culture with many beautiful castles, cathedrals and monuments. I felt like I was being transported back in time as I stood outside the Alcazar of Sevilla, a renaissance royal palace, with its courtyard lined with beautiful orange trees and many horse carriages. Valencia is known as the city of arts and sciences. Valencia was a very interesting city to visit because of its diverse architectural scheme. As I walked through the historic city centre I saw many of the same architectural influences I saw in Barcelona; each building was decorated with intricate, colourful tile work and old stones. But in other parts of the city the architecture was very modern and it was very cool to see the contrast. This city is located on the mediterranean coast of Spain, so I also got to spend some time on the beautiful white sand beaches.

Each city had a unique character and it was amazing to experience these individual cultures that make up the larger umbrella, that is Spain. Although there are so many different subcultures present here, there are definitely a lot of commonalities in this country. Here are 10 important things I’ve learned since I arrived in Spain: