Packed, ready to go… and ready to try something new! 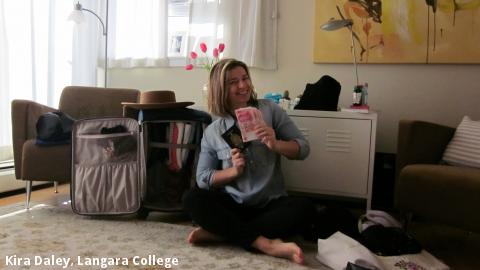 In less than 1 week I will be in China! On May 16th I will land in Shanghai with my group from Langara College in Vancouver, BC. I almost can’t wait! I realized that one of the things I am most excited about in China is food! I decided to seek out and try one special dish in each area that we will visit.

I figure I may as well tackle this one right out of the gate. I’m not a vegetarian, but I do have a particular fondness for tofu. Stinky tofu is apparently terrible smelling and is even described as “ugly”. It’s made by soaking tofu in a solution of vegetables, meat, and fermented (aka spoiled milk) with the optional add-ons of things like dried shrimp and bamboo shoots. After months in this curious bathwater, the tofu is most often fried. Now that I’ve written that description I’m having second thoughts about eating it….

This chicken is served on a lotus leaf and has a great background story. Once upon a time, a beggar arrived at the village of Changshu in Hangzhou. He had one chicken and wanted to cook it. With nothing but a knife and a fire, he slaughtered and gutted the chicken, wrapping the chicken with yellow mud (without plucking it), and roasted it. When he peeled off the dry mud, the chicken's feathers came off with it! Don’t worry though, even though today’s cooking of Beggar’s Chicken is mostly identical, it has been improved a lot and is much cleaner and healthier.

How could I go to Beijing and choose anything other than Peking duck as my main dish?! Peking duck has been around since the imperial era and is known for it’s thin, crispy skin with authentic versions serving mostly the skin and little meat (where can I sign up for that?!). While doing a little reading for this post I found out that ducks bred specially for the dish are slaughtered after 65 days and seasoned before they are roasted in a closed oven. A short life with a delicious end. I will honor every one that I eat!

Our last stop is Shenzhen, and we will be  attending classes at the Shenzhen Polytechnic School for a little over two weeks. I can say right now I’ll probably just try something new to eat every day!