Making Friends while on Exchange 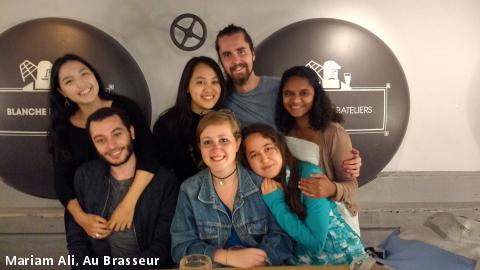 By Mariam Ali, Simon Fraser University, winner of the 2017 Stories from Abroad Scholarship.

As I’ve said, making friends was a bit of a challenge for me, but as time passed I created close friendships that I hope will stand the test of time and distance. It's often easiest to make friends with fellow exchange students since they're experiencing the same culture shock as you. In my experience, most exchange students are open-minded, warm and curious about the world. They’ll probably be curious about you, as you will be curious about them. Exchange students will also want to create new connections and experiences in a foreign country, just like you. A lot of them have fascinating stories about themselves, their cultures, their countries, or whatever else might interest you.

Speaking of curiosity, wherever you go for exchange, locals will probably be curious about you too, so take advantage of this to create connections with them. Chances are that your school will have cultural associations welcoming exchange students and pairing them up with locals. During my second semester in Strasbourg, I joined the Jeunes Ambassadeurs d’Alsace and was paired up with a parrain, Philippe Choukroun, a local who became a second father of sorts. He took me to cultural events, showed me around Alsace and gave me access to life in the region. With the Jeunes Ambassadeurs, I’ve also spent time with foreign students going to other schools in Strasbourg.

Participating in events and activities outside of school is also a great way to meet locals. I took a weekly Farsi class and ended up becoming good friends with some of my classmates. One of my classmates, a woman named Pascale, invited me to spend the week-end in her little village in the Vosges mountains, one of my most cherished experiences. These friends have also helped me in several situations, such as loaning me their luggage or printing things out for me. Meeting these people allowed me to see life in Alsace beyond school and my immediate foreign exchange student friends and truly integrate myself to life in Strasbourg.

To all those friends, you were the best part of my exchange and I feel blessed to have known all of you. A person’s friends reflect their personality and I’ve learned a lot about myself with you all. I wish you all the best in whatever you do, whether that be studying law, becoming a journalist, helping refugees, working with NGO’s, pursuing a master's or taking a gap year to explore the world. Thank you.