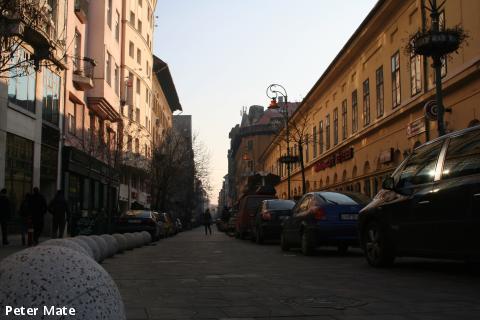 By: Peter Mate, Fairleigh Dickinson University, Vancouver Campus, winner of the 2017 Stories from Abroad Scholarship and a member of the BC Study Abroad Writer in Residence Team.

Awareness of surroundings is critical in maximizing satisfaction when studying abroad. This maximizing effect derives from the detection of appropriate actions relative to ones environment. Hence, determining the correct action, relative to ones environment determines the level of satisfaction when travelling. This awareness evidenced itself while I lived in Raday Utca (street) in Budapest’s IX district. This region of the city borders the cities District V (Downtown), District VII (area frequented by tourists), and District VIII (a notoriously seedy portion of the city). Hence, District IX absorbs the qualities of its 3 counterparts to create an “up and coming” neighbourhood filled with peoples from varying socio-economic backgrounds. This setting created a dynamic space within the city that contained higher proportions of young people, new social spaces and higher rates of homelessness.

With this in mind, my principle objective when I first moved into district IX was to explore. I chose to explore the district to gain a thorough understanding of the areas transit, environment and disposition. Due to this exploration, I discovered that the district attracted a large crowd of homeless’ during the evening. This homeless crowd wandered throughout the district until late in the evening to sleep within the Kálvin Tér metro station near my apartment. Moreover, Raday Utca’s proximity to the cities nightlife districts led to district IX being filled with partygoers until early in the mornings. Due to these observations, I was able to plan my evenings to avoid any incidence’ with either group. These plans involved taking alternative tram and metro routs during the evenings and weekends to separate myself from both groups when possible. These alternative routes ensured that I avoided any situation that could potentially escalate into a dangerous altercation.

Based on my experiences, exploration and awareness of your environment is a necessary condition to ensure safety abroad. Long-term travelers should spend an entire day exploring the area immediately surrounding their accommodations to discover amenities and services at their disposal. Moreover, exploration will enable travelers to uncover any potential problems that may arise during their stay. This knowledge will prove invaluable in preventing potential conflict or negative incidence’ from occurring.