The Day I Landed in Reykjavik 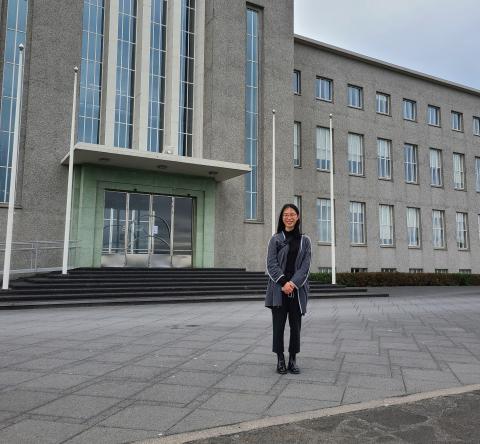 By: Stephanie Wong, University of Victoria, winner of the Fall 2021 BC Study Abroad: Stories from Abroad Scholarship

August 20th will forever hold a special place in my heart. This is the day I landed in Reykjavik, Iceland to start my 4-month exchange at the University of Iceland. It was one of the scariest things I’ve ever done in my life but one of the proudest moments I’ve ever experienced. I had always known I would do an academic exchange at some point of my post-secondary career, and I knew I had the independence and maturity to do so, but it was still a challenge moving to a different continent for 4 months knowing no one there and living on my own for the first time.

Having vacationed in Iceland and staying in Reykjavik before, I was somewhat familiar with the city itself and some of the neighborhoods/areas. I was already exposed to parts of culture and society and knew majority of Icelanders speak English, so language barrier was never an issue. I was aware of how expensive the cost of living was there, so I knew which grocery and retail knew which stores were more student-budget friendly, and stores that were known to be huge expensive tourist traps. I knew which streets were busy and filled with tourists, and ones that were more residential and quieter. Overall, I had zero immediate culture shock, and this would stay true for the remainder of my stay in Iceland. I think having this pre-exposure helped minimize the big change of moving to Iceland.

Despite having these prior experiences, nothing could have prepared me for the first few weeks once I arrived. I was unable to move onto student housing until September 2nd, yet my courses started on August 23rd. So, I stayed in a hostel in a private room with private washroom for the first 2 weeks I was in Reykjavik. It was a 25–30-minute walk to and from campus, but luckily there was a cheap grocery store across the street. I also had issues with my student residence permit and the issuance of my Icelandic ID number, called “kennitala”, and without it I was unable to access my student and course information, I was also unable to open a bank account to transfer money from my Canadian bank account, which I knew I needed for student housing payments once I moved to campus, and other governmental and official services.

In the end it all worked out and I was able to access everything and be issued my kennitala just before I moved onto campus, but it was very stressful not being able to access my courses and not be able to access services I knew I needed.