Day 10: Around the world in 20 minutes Part III 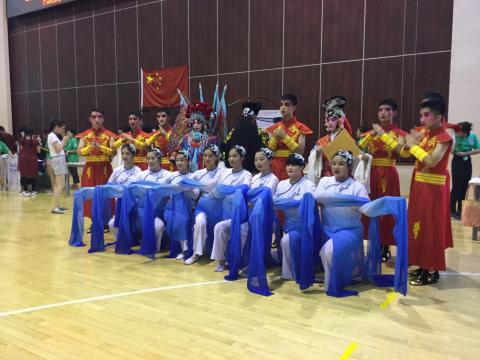 The day was not over yet! Once dinner was finished it wasn't long before closing ceremonies started, and we would finally get to showcase our Canadian performance we had been working so hard on. We went back to our dorms and quickly got into our costumes, returning to the second floor to the auditorium. We sat in theatre seats, in our Bus groups to watch the show.

To start off there was a video about China, beginning with the history and the way culture has grown to the present, now with technological achievements and advanced architecture. It showed that China was modernized and ever advancing, but they still embraced their traditions and culture. Following this they had a series of performances from different high schools in Beijing, dancing and doing martial arts.

I recognized some of the Chinese students from our bus, and others I'd met around campus. The boys were dressed up in feathered outfits and their faces were painted with makeup. They were very talented dancers, and I admired that the boys were not shy about singing and dancing. I find that in North America not many regular high school guys find it masculine to sing or dance, but there was not one guy here who didn't sing, and they did it well too. China seemed to really value individual talents, and the performing arts.

After they had shown us their culture and music, it was time to see the talents of other countries. We watched each country that had been selected to come up and present their 3 minute performance. I really enjoyed all the different music, and the costumes were fantastic. With each one I felt like I had just been to the country and been to an authentic dance or street entertainment show.

Soon, it was Canada's turn and we were called backstage to prepare. We took our places on either side of the stage, and entered with bouncing enthusiasm when they called our name. I was not nervous as I took my place in our formation in the centre of the stage, just excited to show people around the world how friendly Canadians are, and that we know how to have fun!

Jobeana walked to the microphone in front and gave a welcoming speech, telling the audience how First Nations founded Canada and the land we live on, similar to the land we were on now. Then we started singing the anthem, quiet and somber, until the moment when Adom burst through the Canadian flag. As soon as the beat dropped the crowd went wild, startled at the unexpected interruption in our anthem, but delighted at the upbeat and lively Canadians onstage.

From that moment on we were all just having fun, dancing to Shawn Mendes with our Canadian maple leaf shades and backwards baseball caps. The crowd cheered as Adom and Faith did their flips, and even more when we all struck a pose as the final verse rung through the air. Then, we all rose out of our positions and held hands in a line, while Kyra told the crowd, "We all come from different parts of the world, but together," with a final statement in unison: "We are Canadian."

We left the stage to be told by a coordinator that we had been selected to return onstage at the closing remarks for the ceremony.  They sent us to the gym behind the auditorium to wait for our call. This was where the friendship carnival had been held hours earlier, but all that remained were the flags. Here we joined New Zealand and Russia, who had also been asked to come back onstage. I joined in on a game of balloon ball, like basketball with a balloon. We were having so much fun I almost didn't want to leave when they called us back on stage, but I was intrigued at what they wanted us for. Canada filed on stage with New Zealand, Russia, and a group of the Chinese performers to take a group photo with the 'Beijing 2017 International Student Summer Camp' sign. It was a nice way to wrap up the ceremonies.

It was past 10PM when we left the auditorium, but I wasn't missing our last night on the field. In the darkness we came together with the usual group. I chatted with some of my friends individually, as the Americans were leaving early tomorrow morning and this was our last chance to say goodbye. Those who were leaving early were hugging one another and some even crying.

The curfew lights flickered but no one paid attention. We continued talking and saying our goodbyes until twenty minutes after eleven, and the teachers didn't get mad at us for staying out late. Finally, we headed off to bed, leaving each other at the stairwell to the dormitories.

I lay in bed that night, staring up at the ceiling and thinking. Even though the emotions hadn't really sunk in yet, I knew it was going to be even harder saying goodbye tomorrow.