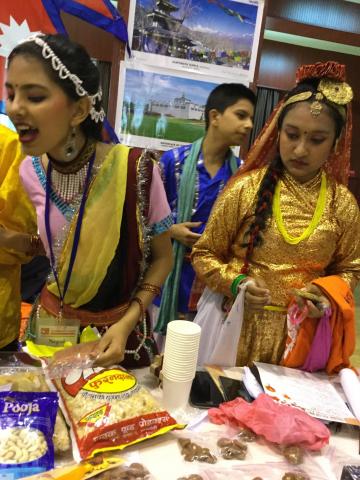 Soon it was lunchtime, and the chaos calmed down to refuel itself. At least, it was all now concentrated into the cafeteria with metal trays of rice and assorted items. And, of course, the fluffy cakes.

Right after lunch Bus number 16 met up to say a goodbye to our bus mates, and our beloved tour guide Jack. Here we had more lots more hugging and even a bit of crying as Jack gave one last speech. I would miss hearing his voice on the microphone during my half asleep dazedness on the bus.

At about 2:00 the auditorium on the second floor opened up for the much awaited friendship carnival. I had been excited about this since the beginning of the week. From what I'd heard about it, each country had a booth set up with food and trinkets to represent their country. It was much cooler than I could have imagined.

The first thing I saw when I walked into the gymnasium were all the flags hanging from the ceiling and on banners strung around the booths. Curled around the outside of the gym were all the tables, teachers and some students standing behind them. I started on the left and worked clockwise, taking my time at each booth to see everything and sample any food that was out.

It was fascinating, like a snippet of that country laid out on the tabletop, taking the form of popcorn candies, Peruvian salsa, vegemite, Polish toffees and Finnish biscuits. Keychains galore were being handed out like an expo, along with stickers, figurines, and even hats. I sampled a bit of everything. I tasted some of what I thought was sesame paper, that was astonishingly ocean-like.

"It's squid." A girl from Nepal, who was handing out packets of the stuff, told me. "Ah. I thought there was something fishy about it." I look at the piece I was still holding, and ate the rest. I was going to try everything, even if it was freeze dried sea creatures.

At the table from Indonesia, I admired all the little handmade figurines they had set out. It reminded me of what you might find in a marketplace. The operators of the table told me it was all up for trade, so I traded a Canadian baseball cap for a bejewelled school bus. Later, I traded a Canadian shirt for a magnet and keychain from Thailand.

When I came to the New Zealand table, I saw the little jar that had haunted my fridge for the past 2 years. Ever since my British friend had visited, and insisted on having marmite for breakfast it had sat in my fridge door, untouched by the rest of my family. Well, this wasn't marmite it was vegemite, but to me it was no different. To the New Zealanders, on the other hand, it was much better than marmite and I had to try it. Tentatively I tried a spoonful of the New Zealand specialty vegemite. It took all the courage I could muster, having to remind myself that I was going to try everything. Also, the fact I got a free keychain out of it helped.

I came in with a bag full of Canadian loot and left now with a collection of candies and keychains from all around the world, and the unmistakable taste of vegemite still in my mouth.