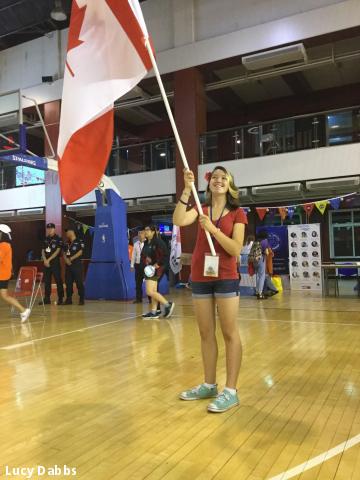 I never realized the importance in the art of selfie taking, never conceived that the skill of holding a phone away from ones face to take a picture would come in handy later in my life. When taking a group selfie, it takes a good deal of skill to keep your arm at the right distance, and the phone tilted at a realistic angle. There are many factors involved, to keep everyone’s faces in proportion, in good lighting, and everyone looking at the camera. Today, my selfie taking skills were put to the ultimate test.

After breakfast, everyone seemed to realize that all these people we had met, all the great friends we'd made were all going home tomorrow. This meant that today was our last chance to spend time with each other, and they wanted a picture to remember every person by.

Today was a relaxed schedule, the whole morning for shirt signing and giving feedback about the camp. I ran back to our dorm rooms to grab my orange camp shirt. I'd given up on wearing it by the third day, it was far too hot, and it was cramping my fashion style. When I returned downstairs I made my way past the cafeteria to Confucius square, where most of the action was happening. Here, is where I took the most selfies I ever have in my life.

Many selfies later, my arm muscles glowing with use, I had a collection photos of me with every person I'd met and even some strangers. There were many photos of me on other people's phones too, many of whom I had exchanged snapchat and Instagram handles with.

As I went around signing my friend's shirts and having mine signed, I also got all of them to write down their social media. Many used WeChat, and some even used WhatsApp and Twitter. Many of the Chinese students didn't have many traditional social media platforms, due to the firewall blocking them, so they added me on WeChat.

A large banner was spread out in Confucius square, students lining up to paint their handprint and sign it. An even longer banner spread down the hallway, listing all the activities of each trip, stickers stuck to the favourites. This was where we voted on our top three favourite activities, to determine which of the field trips might be cut or changed in future years to come.

The field of the track was a similar scene. Orange shirts left and right, people everywhere armed with sharpies, signing on another's shirts and flags of countries. One of the BC people brought out her massive Canada flag which was attracting a lot of people to sign it.