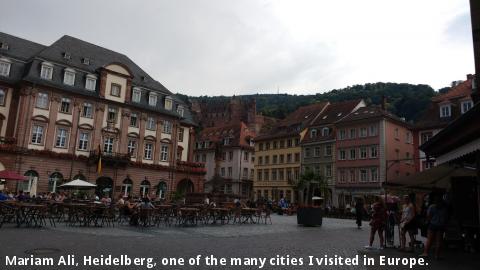 One of my biggest concerns before my exchange in France was earning enough money to pay for it. My uncle recommended that I create a budget and find out in advance how much rent, transportation, food, entertainment and travel would all cost. By talking to other students who had already went on exchange in France, I learned that I would need roughly $15,000 to fund two semesters and live comfortably. Using the advice and the information I received, I set about making a plan to earn enough money for my exchange.

I applied for as many scholarships and bursaries as I could, working hard to boost my GPA above 3.5 out of 4.33 so that I could apply for SFU scholarships. I also kept track of all the due dates for scholarships and bursaries that were specifically targeted towards students going on exchange. SFU Study Abroad, the Irving K Barber British Columbia Scholarship Society and BC Study Abroad are some of the organisations that offer scholarships to B.C. students studying abroad. I also applied for loans and bursaries from BC Student Loans, which gave me extra money to pay for living costs. In addition, I applied for numerous co-ops until I got a position as an Administrative Assistant at the Native Ministries Consortium near UBC.

When I finally arrived in France, I created a monthly budget to keep track of my spending. I used an Excel sheet to keep track of all my purchases, using different symbols and colours depending on the type of item. I also benefited from student reductions on certain items, such as train and opera tickets. In addition, I could go to many museums for free since I was a European resident, and while travelling, I took free tours in the cities I visited. All that being said and done, I actually wish I had spent more money while I was abroad, particularly while travelling. In the end, going on exchange is a one in a lifetime experience, so don’t be afraid to splurge occasionally.