British history, didn’t I learn some of this in high school? 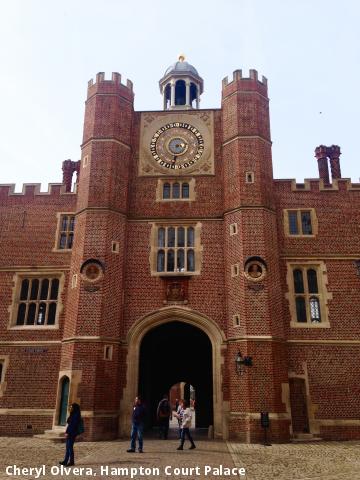 By Cheryl Olvera, Simon Fraser University, winner of the 2017 Stories from Abroad Scholarship.

Growing up in a young country like Canada, I felt the history we learned in school about kings and queens was so mythical and in a land far far away… then I went to one of these lands far far away!

Of all the castles and famous old wonders I have visited so far, Hampton Court Palace is the most historically intriguing. The University of Sussex, where I’m currently studying, has a super cool International Student Support organization that arranges trips and outing for the international students. They arrange the tickets, the coach, the itinerary– all I had to do was show up and we left right from uni (the British shorthand for university).

“We don’t drink water– only wine, beer, and mead!”

Apparently the water was quite contaminated, so it was safer to drink wine, beer, and mead– even the children drank!  I remember briefly learning about King Henry VIII and all of his wives in social studies—maybe in junior high??—but seeing the palace and portraits in person made it come alive. Did I mention I also have a wild imagination? I am a fine arts student after all…

Food was associated with wealth and power, so the kitchens were absolutely massive and the king was said to have eaten mostly freshly roasted meat, not canned or preserved like the paupers. Large roasting spits over 7 feet long were placed on racks over the front of a huge wood burning fireplace that fit at least 6 of these spits. And did you know the original meat pies were solely just another way to cook meat? The cooks made a simple flour dough used only as a vehicle for the meat whilst roasting in the ovens; the tops were torn off and discarded and the meat was eaten or served out of the pastry bowl.

Hampton Court Palace also has a separate chocolate kitchen, and King George I had his own personal chocolate maker. The chocolate room right beside had beautiful serving glasses and was for tasting the drinking chocolate. Now that is my kind of palace!

Walking around the 60 acres of immaculately groomed gardens, I couldn’t help but wonder what it would be like to live in those times. Every single thing, from the wide cobblestone roads to the tall gates to the Great Vine, is just so incredibly big. I pictured the nobility riding in on horses, having feasts of roasted meat and pies in the Great Hall, and then settling in the State Apartments to drink wine and beer amongst the magnificent artworks (most masterpieces are now housed in the Cumberland Art Gallery).

It’s so incredible to learn about history whilst physically standing in the places it was all taking place. I totally forgot that King Henry VIII went through 8 wives… the British don’t because they have a rhyme to remember the most important facts:

I look forward to touring around more stunningly beautiful historical sites and learning these quirky tidbits of information. In between my uni work of course!