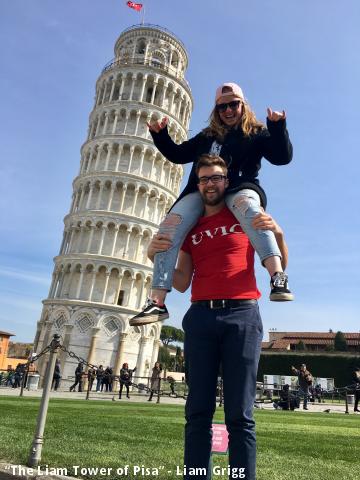 Liam Grigg, University of Victoria, winner of the BC Study Abroad: Stories from Abroad Scholarship

Waking up and starting out at the white snowflakes is one of the last things I expected to see in Southern France. Living just two blocks up from the Mediterranean, I had become accustomed to ocean storms, but snow was not in my forecast. This was also the worst day this could happen, as my roommates and I were renting a car and going on a road trip to Western Italy today.

We all yawned, shouldered our bags and climbed into our elevator built for one, but somehow can hold enough weight for three. Stumbling into the cold wind, we miserably Tetris packed our bags into the trunk of the car, ready to depart. Six in the morning has never agreed with me and not even the thrill of a new adventure could break my sleepy state.

After falling asleep in the backseat for what felt like years, I was awoken to an announcement that we had arrived in the city of Monte Carlo, Monaco. Although very much French in language and culture, Monaco is technically another country. Coming in at a tiny 1.95km2, it is also the second smallest country in Europe. The first thing I always notice in Monaco is the wealth. Money oozes from every crack and crevice in the buildings and sidewalks. Every Ferrari that screams past or every person sitting in the cafes reminds me that I don’t belong here. Despite being beautiful, Monte Carlo always makes my skin crawl.

Once we left the port of Monte Carlo and their famous racetrack, we made our way back up into the mountain pass and towards the Italian border. Because of the falling snow, the trees and mountainside were dusted with a beautiful white blanket, creating a picture, reminiscent of Narnia. Once we traveled about 100km in the winter wonderland, we entered a long tunnel that marked the border between France and Italy. On the other end of the tunnel, as if a white veil had been suddenly lifted, the snow disappeared and made way for a beautiful, sunny day. To the right of us, we were looking out over the glistening, blue ocean and rolling hills covered with grape vines and olive trees. The next few hours flew by as we zoomed through along the coast towards our final destination of Pisa. Eventually, we came out of the mountains and travelled along the coastline, allowing the sun to illuminate the brightly coloured Italian apartments. Once we neared our first city, I suggested we stop to try two of the things that Italy is famous for: espresso and gelato. I can say that neither of the two disappointed. The espresso was rich and smooth with a slight hint of coffee and my lemon gelato was the perfect refreshment after sitting in the warm car all day.

Piling back into our car, we completed our 375km journey to Pisa in the next two hours. Once we arrived, I noticed two things about the Leaning Tower that I’ve never heard of before: 1) it’s a lot smaller than people say; 2) it leans way more than I ever thought was possible. Although I have seen the tower a million times in person, I was not prepared for just how much it leans to one side. It really looks like it will topple over at any second. The other surprising part is that Pisa photos are way more difficult to do than I thought. Getting the perfect angle to hold the tower or to pretend it’s a giant ice cream takes a high degree of patience and communication. The best part of being there is watching all the other tourists try to align themselves beside the tower. All of them look quite ridiculous. My favourite pose was creating our own tower, which I appropriately titled “The Liam Tower of Pisa.”