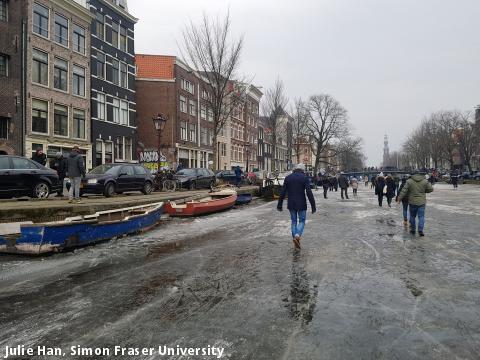 By: Julie Han, Simon Fraser University, winner of the BC Study Abroad: Stories from Abroad Scholarship

In secondary school, I got the opportunity to attend a program at the University of Calgary for four weeks. The first weekend, I got 56 mosquito bites in 24 hours. The next morning, my legs swelled up like balloon animals by a drunk birthday clown. Two weeks later, from maybe 100 meters above, a seagull dropped a gnarly bomb right on my phone screen – bullseye. One week later, I ripped my big toenail off with a door frame. And those four weeks were eerily reminiscent of my first four weeks here at the University of Amsterdam. My dumb luck.

As soon as I landed, I was struck with the thick musk of European air – much denser than a West Coast breeze. When I finally arrived at my accommodations, I began to unpack immediately, despite my hunger pangs and jet lag. This unwise move set the tone for the next three days, which were packed with activities, lots of walking, and lots of waiting for measly portions of food. Food in Amsterdam is surprisingly expensive, even compared to the rest of Europe.

The following three weeks were occupied by a viral infection. To spare you the finer details, the doctor offered to prescribe me codeine to sedate me while I slept, because she was afraid the severity of my coughs might snap a rib. Note: Dutch doctors often refuse to prescribe antibiotics. Even though that, I strode forward blindly. It was my birthday at the end of the month, and I refused to succumb to my bad luck, despite all the signs.

At my – not surprisingly – sparsely attended, but not unsalvageable birthday dinner, Louise mentioned Prisengracht had frozen over and invited me to come along. “The first time in ten years!” So, I went, thinking at this point “hey, maybe I’ll fall in.” The next morning, as we approached Prisengracht, crowds with ice skates slung over their shoulders began to thicken along the canals. A quick turn revealed canals flooded with parents, babies, dogs, couples, and even a postman.

By now, the ice was thinning, and schoolboys began jumping from the banks. Watching from a safe distance would have been the sensible thing to do, what I would have done under any other circumstances. But I went, and I froze my toes, and I finally broke my bad luck. All it takes is persistence, patience, and some dumb luck.