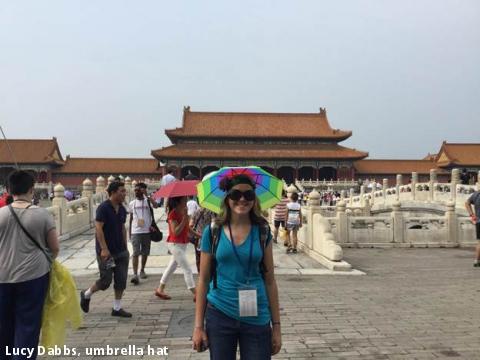 By the time we reach the great temple with Mao's portrait, the poncho has come off and I am now welcoming the rain upon my clothes.

As we enter one, then two security checkpoints, and make our way through the square towards the forbidden city, I develop a goal. I notice numerous locals wearing rainbow umbrella hats, about half the size of a regular umbrella and worn with a band around the forehead. I want one.

I decide that I need to have one and make it my mission to obtain one. I love the colour rainbow. This is because I cannot choose, I love all colours and I love diversity and I love standing out. I want this umbrella, and I feel it could be exponentially useful on the West coast of BC, where it rains 3 out of four seasons of the year. I could use it for my treks to school and lunchtime ventures to Tim Hortons in the rain.

On our way to the third security checkpoint, I sneak away to a stand selling the umbrella hats and quickly count out twenty yuan. I return to the group, triumphantly wearing the umbrella on my head.

Of course, it’s my luck, no longer than five minutes after becoming acquainted with my umbrella the sun comes out and the rain peters out. I learn that the umbrella hat is also an excellent sun hat, and with a pair of Jackie Chan sunglasses, I complete the weirdo look.

Within twenty minutes we’re all sweating more than we were at the Great Wall of China. The forbidden city is huge, with many rooms for all the family of the emperor to live in. Now empty, we aren't allowed to go in but we could look from the outside and appreciate the enormity of the palace.

Jack is our tour guide on the bus, and we've gotten to know him during the days of bus karaoke and stories of Chinese history. Without Jack encouraging and pushing us all to keep going, I don’t know how I would have made it through the sweltering heat of the Forbidden City. Together, our group persevered, and together we got through it.

Miraculously, Jack worked his wonders and persuaded our bus driver to come pick us up directly from the exit of the Forbidden City, saving us a two block walk to where the bus was parked.

I eat dinner in a daze, eyes glazing over to the point where I almost forget to eat my kitten cake. Just when I think I can finally go relax, I remember we have a rehearsal for our Canadian performance tonight.

The performances were something briefly mentioned before we went on the trip, and I am curious to learn more about what it entails. It turns out that not every country is doing one, and that most countries who were a part of it do a more traditional take on it. Though the suggestion was a 3-5 minute performance repressing your country and its traditions, we were told almost every group did a song or dance. This didn't necessarily mean that a song or dance is what we had to do, though.

We have 22 people from BC, but unknown to me there are also three girls from Ottowa. With a larger group than most other countries, which have anywhere from five to seventeen students, we embark on quite the brainstorming session. Our teachers find us an empty classroom to work in. After a long day out in the heat, the hallways are smothering me and I am not the only one feeling the heat stroke coming on. As we step into the gloriously air-conditioned room, a wave of cool air seems to do the trick.

Canada circles up in the room, and within minutes we decide we are going to take a different aspect on this performance. We’re going to be unique and imaginative and make a creative mashup of all things Canadian. Also, we realized very few of us could sing or dance. Since Canada is such a young country we don't have much history. What we do have is our diverse set of thinking, and humorous stereotypes to embrace.

A student named Hannah from my school is chosen to take leadership in the organization of our performance. With her enthusiasm and talent, it is evident she is great for the role. She starts us off by choreographing dance moves for us and leads a discussion where each of us contributes our ideas. Within an hour, the beginning of our showcase is forming, into a funky cohesive ensemble.

It isn’t until late at night when practice finally wraps up. I go down to the track with a couple other BC people, and we join the Argentinian group. This is my favourite group, where most of the Spanish people sit together and talk, passing around mate in the circle. They’re very friendly and casual, and it’s a nice way to chill for the last hour of the evening before curfew.