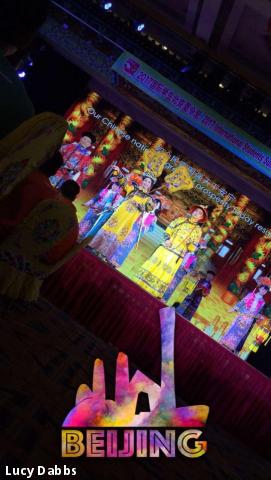 The BC group still sits together at dinner, but this is the first official night, so people are still getting used to the idea of being able to walk up to any group and be talking to people from countries I haven’t even heard of. I could just sit down and have a meal with the people from Bangladesh and have conversations about homemade flutes with a side of dessert. The dessert, by the way, is amazing. They’re these fluffy cakes that are soft like a kitten’s fur and yet taste like vanilla.

The track had become the central unofficial hangout spot, where groups would gather in the evening in circles. This type of societal formation was really fascinating. The first night I had spied on it from the bathroom window in my room, my attention captured by the foreign music and upbeat shouts of greeting coming from the field five stories below. Tonight, I was going to investigate.

I find some of the BC folks sitting in a group in the bleachers of the track on campus, and join them after dinner. We hang out and talk about the day and our first impressions of China, and complain about all the stairs and the heat. Even now, at 8:00 at night it’s still nearly thirty degrees.

I sit and watch the different groups below and one end of the field where a soccer game has been set up. There’s also a basketball court on the outside of the track, where some guys play a half court game. Eventually, I head off to my dorm to shower and try to catch up on sleep.

Today my mental list of foods tried expanded to include fluffy vanilla cakes, funky ice cream bars, many foods I never found out what they were, and the McMystery breakfast sandwiches which we discovered were chicken. All in all, not a bad day.