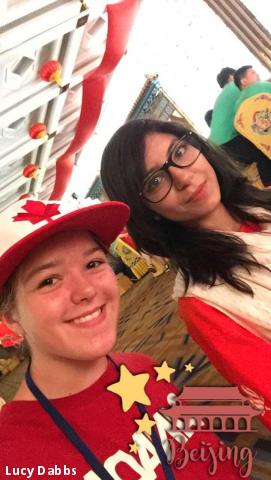 As the representative of Canada, I have to get up an hour early to join the other representatives on our transport to Tsinghu University where opening ceremonies were being held. My first day here at the camp and already I have to leave my roommates who I just met to venture forth into my exciting duties awaiting. I put on my elaborate Canadian outfit, consisting of various Dollar store accessories and two flags stuck in my ponytail.

At 6:00 sharp Gloria comes by to collect me, and by 6:15 AM I board a bus along with 32 other students, one representative from each country. Before I even reach the bus, the representative from Argentina addresses me. It’s a simple "Hey Canada, I like your outfit," but it is enough, and by the time we find seats at the back of the bus I’ve learned his name is Antonio. Argentina and I sit with New Zealand and Australia. We bond over our McDonalds breakfasts that were handed to us as we boarded, trying to figure out what type of meat is in our McBreakfast sandwich. We talk about school, work, and even get onto the topic of government and elections. Brie from New Zealand tells me I have a very strong accent, and asks me to say different Canadian words. I've never had anyone enjoy my "accent", it made my day! I teach them words such as toonie and touque, and told them all about “Timmy’s”.

We have a lot of time backstage before our 5 minutes of fame in the ceremony. As we wait we are each handed our country’s flag, which I hold in my hand in addition to the ones in my hair and the large flag I wear like a cape. I feel proud to be representing Canada, and many countries greet me and ask me about Canadian things. It’s a great time, and I really enjoy being able to converse with the different countries.

I don’t learn many names, as everyone refers to one another by the name of their country. It reminds me of Model UN conference I went to in Vancouver, where there is a delegate from each country on every committee and everyone gets to know which each is notorious for. “Oh, there goes Japan roasting the UK again,” and “Oh, there goes Poland bringing up the crisis of 1949 again,” (these are strictly based on the personality of the delegate, and not a reflection of the actual country’s opinions).

I also learn how many of the representatives were chosen to come to the BIEE camp. For some, it is through Chinese class and because they are able to speak mandarin, for others it is connections that their school has with the organization.

Soon the stands filled up with people, and opening ceremonies begin. Finally, the woman coordinating gives us our cue to walk on stage. We all line up in the order from last night and wave our country's flag. I stand beside Costa Rica, while one by one the representatives introduce their country in its traditional language. I discover that New Zealand actually has a different language, called māori, that is spoken by the natives.

Afterward, we are able to return to the audience and enjoy the rest of the show, a fabulous display of Chinese performing arts schools. This is the first time everyone from the camp has all gathered in one place, and I look around curiously to see all the different groups. Some people had arrived more than a day ago, and some have just arrived hours ago.

Will u contact me on instagram or other social site? I m that girl who is in this pic

Absolutely! Just send us your

Absolutely! Just send us your social media handles to info@bcstudyabroad.ca!